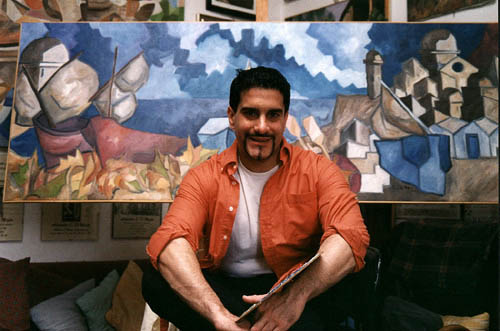 Born in New York in 1964 from Italian parents, he studies in Italy, in a limited provincial environment, spending the summer in USA, a world much richer in stimuli and loves. During the long Italian winters, spent in the school-home routine, the only escape is his fantasy and his pencil becomes the tool to achieve his own dreams, thus approaching himself to the world of Art which will play such an important role in his life. After he gets his Art certificate of Secondary Education in Taranto, he matriculates at the Faculty of Architecture of “La Sapienza” in Rome.
Rome, the pleasant synthesis between the two different worlds of his adolescence, is the magic place of his very first apprenticeship in the hard search of his self and the reasons of his own art.
In his symbolist-figurative period, his paintings, filled with white geese swarming in squares, streets, or lying lonely in wait, are symbols of purity and ingenuousness, respect and simplicity. The silent and astonished geese, witnesses of the every day life, represent the best and most honest part of ourselves and are, in a dream dimension, a projection of purity and liberty, a reminiscence of our lost `age of innocence´.
Once thid phase is concluded, Alex’s art gets nourishment and life from his studies in architecture:his still current
neo-cubist-figurative period starts. The city architectures melt and wrap the senses in a new magic, with warm tones in a modern figurative style,in which abstraction sofltly takes shape in “wonderful metropolitan enchantments”.